If you’ve been around fitness for a while or even a few months, you probably have read or heard that there are certain exercises for specific muscle groups that reign supreme. For example, we can’t tell you how many times we’ve heard someone say that without question a back squat is king for legs, a barbell bench press is always the answer for chest, and so on and so forth. Yes, these movements have a place in certain programs, for most people, but to say they’re the answer for everyone is erroneous. We are all so anatomically different from our bone structure to muscle insertion and origin, that an individual’s biomechanics can vary dramatically. Take a long-limbed person for example. Their back squat will look far different in comparison to a shorter person with drastically different leverage points. The taller individual will have to do more work with the same amount of reps due to more distance traveled (work = force x distance), while also discovering that the back squat may not be the best in regards to hypertrophy as it is for the shorter, more compact lifter. A more strategic approach has to be used when targeting movements and exercises that we aren’t necessarily ‘built’ for, and that can be quite taxing when performed.

With that being said, if you’re a longer limbed individual with a smaller bone structure (i.e. a smaller frame; skinny knees, wrists, and elbows), it is best to focus on unilateral leg exercises first during a workout with bilateral movements such as a back squat near the end of your workout. Anecdotally speaking, individuals with longer legs have surprisingly strong hips and low backs. However, the caveat is their legs receive less of the workload, less tension, less stimulus. This is why a split squat, walking lunges, single leg leg-press, and step-ups, to name a few, should be prioritized rather than thought of as an accessory lift for a bilateral movement. The other reason for prioritizing these first is that they require more attention to form giving your joints and tendons (which can take more of a beating if you’re smaller framed) a break. Additionally, a front squat should be used for taller lifters in search of quad development. Yes the front squat develops the quads for nearly every individual, but it doesn’t get enough credit as the back squat and should be prioritized with long-limbed lifters since it keeps them in a more upright position, ultimately taking some of the stimulus from the low back and hips and putting it into the quads and core. As for healthy, shorter lifters, the world is their oyster, and most seem to gain mass easily with bilateral movements, with the rest being for detail. But regardless of which leg movement you choose, make sure you give it 3-6 workouts to show you what it is capable of as far as strength and hypertrophy.

In regards to upper body, let’s start with chest and shoulders. If your arms are long, that is, longer than your height, then the dumbbell bench press will be superior to barbell bench press as far as chest development. For shorter armed individuals, chest mass can come from both, however, I still encourage both lengths to utilize both methods throughout their training but to focus on one more than the other if hypertrophy is the goal. As for shoulders, dumbbells are also superior. A seated dumbbell shoulder press will isolate the muscles more than a seated barbell shoulder press. Dumbbells keep you more honest than a barbell, due to the fact(s) that one: you can cheat with form more with a barbell, and two: both limbs have their own load to bear and we eliminate the imbalance of a stronger limb taking over.

When it comes to training back, things become a little trickier. It is the one muscle group where unilateral training is secondary to bilateral. The barbell row, deadlift, and pull-up are the most bang for your buck exercises regardless of height or limb length. However, the deadlift is far more difficult for someone who is shorter in height and limb length, or for someone who has a longer torso. For these individuals, a barbell row will pack on more muscle and be less taxing on the CNS. As for someone with long limbs and a shorter torso, the deadlift will come easier and can be quite beneficial for hypertrophy. Both should be programmed and can also be done within the same workout, however one should be prioritized earlier in the workout.

As far as arms, many have argued that shorter limbed individuals don’t need to train them since they get enough stimulus through pressing and pulling movements. We disagree with this, but do believe they need considerably less volume and less priority, i.e. triceps would be done at the end of chest and shoulders rather than at the beginning of the workout or done on their own day entirely. Again, unilateral training is superior when it comes to training arms and most exercises work for everyone. However, if you’re broad shouldered and have longer arms, utilizing two ropes for extensions, a long/wide bar for push-downs, and seated incline curls are best for getting the most stimulus. Lastly, if you are a long-limbed individual, make sure the volume for your arm training matches the volume for your calves as you don’t want to create an aesthetic imbalance.

In the end, any exercise can benefit a lifter if programmed and performed correctly. But with these tips you should be able to fast forward your progress. Just remember to stay consistent, eat for your goals, train with intensity, and sleep well, otherwise strength and hypertrophy will go to the wayside regardless of which methodologies and ideologies you choose to follow and listen to. 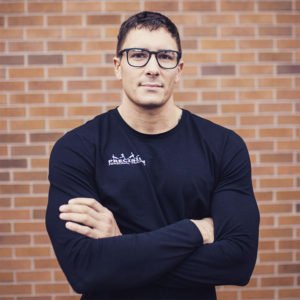 Want our blogs straight to your inbox?

Falling: How to Reduce Your Risk of Injury